Listen Up: New Insights in the Era of Audio Accountability

We are in a new era of audio. Thanks in large part to the proliferation and advancement of new devices and the growing popularity of audio-based content, the audio landscape has changed drastically over the past few years. Cultural conversations have shifted from “what are you watching?” to “what are you listening to?” In fact, Americans spend a quarter of their waking hours with audio.1

With audio consumption growing at a rapid pace, brands are taking notice. Given this, as the space matures, advertiser requirements will become stricter, and we’ll need to hold ourselves accountable to these requirements to be part of the discussion. As a leader in audio, it is Pandora’s responsibility to pave the way for continued growth for advertisers. We believe this should be anchored in the assurance that audio ads have the opportunity to be heard. We have been investigating the way forward for some time now, and the past few months have shown promising results that tell us we’re on the right path.

Let’s go back to when the MRC introduced their viewability standard. It was fairly intuitive to believe it was possible to ascertain that you were viewing a video ad within the two-second parameter. However, it has felt less obvious what two seconds means for an audio ad. These are two different mediums, and we hypothesized that the brain might interpret audio different than it does a visual / video-based asset, and therefore, the standards may need to differ. That’s why when the MRC released its digital audio standard last year (whereby a valid Audible Ad Impression should play in a non-muted state for a minimum of two continuous seconds), we wanted to investigate.

The Road to Audibility

Was two seconds too short, too long, or the right length for an audio impression to have the opportunity to be heard? These were the questions we sought to answer when we decided to conduct our own research around the two-second standard to either recommend or suggest alterations to the MRC standard.

Earlier this year, Pandora partnered with Ted Zanto, Assistant Professor of Neurology at the University of California San Francisco and Director of the Neuroscience Divisions at Neuroscape, to determine the brain’s ability to recognize an audio ad - the opportunity to hear. Tapping into 376 adult participants, we tested whether listeners could remember information from 2-second, 4-second, and 8-second ads. This was achieved by leveraging free recall - the ability to remember ad content without aids or cues, and recognition - aided recall leveraging signals to ask if the content was previously advertised.

Participants were asked to play an online game for 13 minutes and then answer a 5-minute survey, which included questions to determine the effect of the ad duration on memory. During the 13 minutes of gameplay, participants were exposed to Electronic Dance Music with three ad breaks consisting of three varied length advertisements in each break.

These findings were conclusive enough to determine 2-seconds is enough time for the human brain to recognize an ad. This means that at just two seconds, you are acknowledging that you are listening to a commercial and can thus make a decision whether to continue listening to that ad. Think about that for just a moment - two seconds, and you can make a cognitive decision to keep yourself engaged with a brand’s audio message. These results not only mean that the 2-second standard proposed by the MRC is probably a good starting point, but they also shed light on new opportunities around how to treat creative audio ad formats.

Interestingly, we also just came off the heels of creative audio ad testing, where we analyzed the optimal placement of a brand mention within a typical 30-second ad spot. The results indicated that listeners were 7% more likely to remember a brand’s name if it was presented in the first three seconds of the ad. We don’t have all of the answers, but the information that we now have around our brain’s ability to recognize and take away information within the first few seconds of an ad is incredibly interesting and worth further discovery.

Paired together, the results of these two studies indicate that the first few seconds of an audio ad matter - sparking the human brain to recognize and recall. This has also provided proof points that help to support the 2-second audible impression standard issued by the MRC, as we continue our efforts to pursue more robust and standardized audio quality measurement. 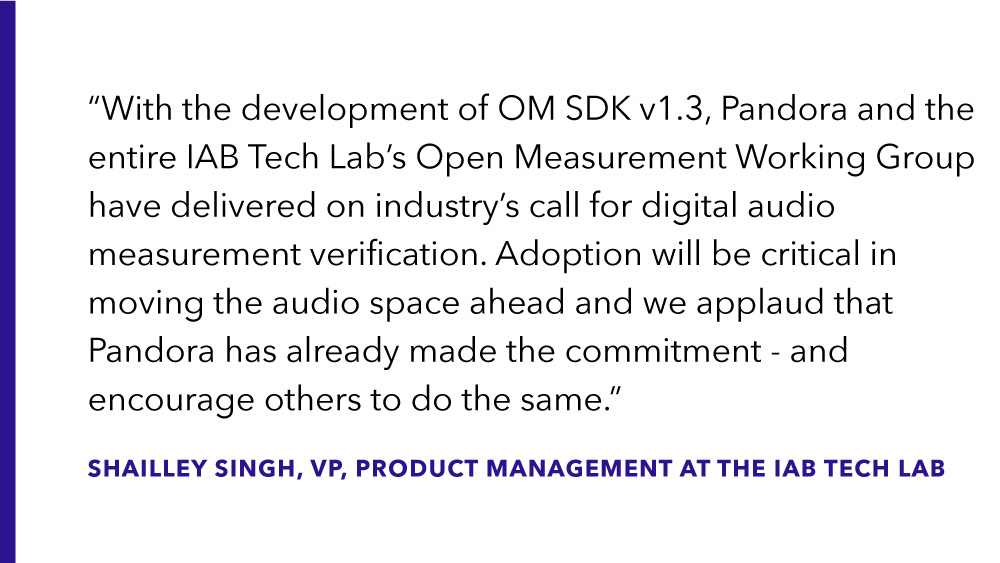 We’ve been hard at work, ensuring that OM SDK v1.3 will deliver the signals needed for any verification vendors to measure against the MRC Digital Audio impression standard in a scalable way. Once released, we encourage all publishers with streaming audio inventory to adopt the SDK, as ad verification providers will be working to build out their systems to support this metric at the same time.

Shailley Singh, VP, Product Management at the IAB Tech Lab shares our same vision, "With the development of OM SDK v1.3, Pandora and the entire IAB Tech Lab’s Open Measurement Working Group have delivered on industry's call for digital audio measurement verification. Adoption will be critical in moving the audio space ahead and we applaud that Pandora has already made the commitment - and encourage others to do the same."

2020 will be the year that audible impressions are available for advertisers at scale. Pandora will integrate OM SDK v1.3 as soon as it becomes publicly available and looks forward to building out further opportunities for research around this topic.

As the audio ecosystem continues to evolve, there will be changes that publishers need to embrace to ensure that digital audio meets the strict standards of a broad and growing variety of advertisers. That’s why it is imperative for the industry, publishers, and measurement providers alike, to come together and work towards making these new solutions scaleable and transparent.