Rainbow Road: The Secret History of Advertising to LGBTQ+ Consumers

Advertising is like an infinity mirror — it simultaneously reflects and shapes our society. As both an influential force and an observant record, advertising is a useful lens for examining culture. When you flip through an old ad magazine, the ads transport you to an era where 7UP was marketed as the soda that infants like best, or Wonder Woman enjoyed the full, rich flavor of Virginia Slims with a headline that declared ”You've come a long way, baby.”

Indeed, we have come a long way when it comes to LGBTQ+ inclusion and examining advertising can help us chart America's evolving perspectives.

LGBTQ+ people have always been a part of humanity's fabric, yet have only recently been represented authentically in mass media. By examining the ongoing journey of LGBTQ+ representation in advertising by decade, we can glean a better understanding of the progression of our nation's cultural attitudes.

Here’s the part where I tell you that this piece is written by a cisgender, straight, white male. While I did consult with several of my friends in the LGBTQ+ community when researching and writing this piece, I humbly recognize that I’m telling someone else’s history.

Before the Cafeteria Riots and Stonewall helped bring gay rights into the national conversation, homoerotic imagery could be found in advertising going back to the beginning of the 20th century. Yet it wasn't until the 1980s that brands started marketing directly to a Queer audience. In 1981, Absolut Vodka became the first mainstream brand to commit to full-page ads in gay media outlets like The Advocate and After Dark. They featured the same ads they used in “straight” publications, but committed major media dollars to targeting their gay audience. For a global brand, this was a new move. At the time, most brands feared that such a gesture would alienate their larger, mainstream audience.

The fact that LGBTQ+ folks had to stay in the closet for most of the 20th century necessitated a secret, shared language that could allow people to recognize one another as a part of their community. This language was eventually co-opted by brands as a shorthand to reach gay audiences through coded symbolism. The unchecked AIDS crisis of the 80s, enabled by widespread intolerance, meant that brands were taking a huge risk by reaching out to gay consumers. This "code" gave them a discreet way to do it.

In 1986, Absolut created an ad featuring the artwork of Keith Haring, a gay artist and AIDS advocate. To the general public, it was merely an ad highlighting the work of an underground painter, but to the gay audience, it was a meaningful statement that telegraphed the brand's support of the LGBTQ+ community. Other brands started targeting gay consumers as well, primarily other alcohol and tobacco companies who had little or nothing to lose from potential boycotts from the religious right.

At the end of the 1980’s, Benetton broke the cultural embargo with their iconic "United Colors of Benetton" campaign. Extraordinarily bold for its time, it featured the first representation of lesbians in any mainstream advertisement. Benetton continued to push into controversial territory, with images that included the Olympic rings recreated with condoms, and the final moments of activist David Kirby surrounded by his family, as he was dying of AIDS. 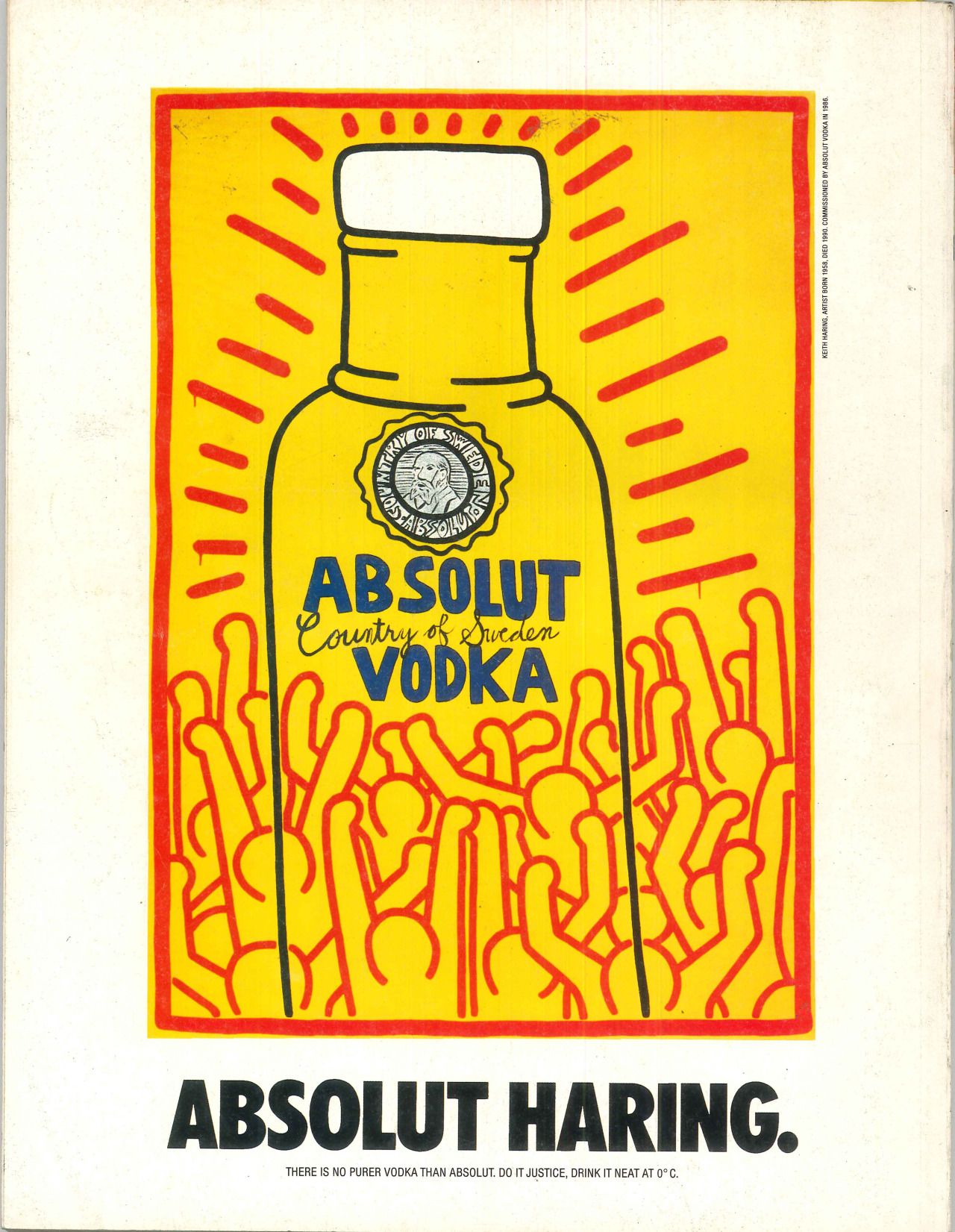 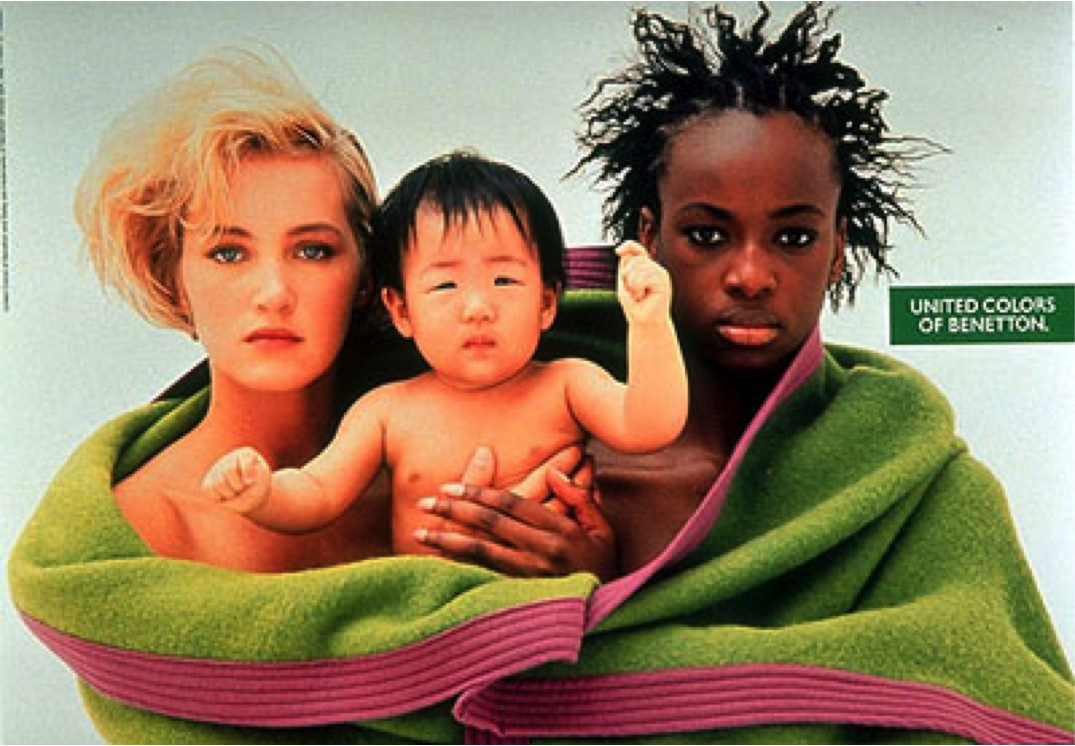 In the 1990s, a progressive Democratic president passed Don't Ask Don't Tell, Ellen lost her advertising sponsors when she came out, and Matthew Shepard’s violent murder shocked our nation. Needless to say, marketing to LGBTQ+ audiences was still seen as taboo, so most brands continued to communicate to gay audiences through the "code."

Lesbians were still very much on the fringe of this emerging LGBTQ+ marketing movement, often unwelcome and invisible to brands. However, in the early 1990s, Subaru noticed that their cars had become popular with gay women. They decided to cultivate a deeper connection with this group and ran a series of ads with headlines that had double meanings—like “Get Out and Stay Out” and “It’s Not a Choice. It’s the Way We’re Built.” One campaign featured different models of Subaru with coded messages on the license plates, like “XENA LVR” and “P-TOWN.” When Subaru tested this particular ad in market research, they found that straight audiences didn’t even notice the license plates, but gay women immediately read the coded message and their loyalty to the brand was further strengthened.

While Subaru wasn't the first company to create ads for LGBTQ+ consumers, it was the first to market to this community consistently, and transparently. Subaru was also the first brand to understand that being an ally meant going deeper than just occasional shout-outs; they invested significant capital into LGBTQ+ causes and actively supported their own LBGTQ+ employees.

In the mid-90s, IKEA created first national TV ad featuring a gay couple. What's notable about this spot is that the focus is not on the nature of the relationship; it didn’t feel like a self-congratulatory PR stunt, but rather one story folded into IKEA's broader communication strategy. As a result, mainstream America saw a gay couple portrayed the same as heterosexual couples—regular, every-day people. The ad normalizes the idea of a healthy romantic relationship between two men—extraordinarily healthy apparently, because they were able to shop for furniture at IKEA without breaking up.

Not even 30 years ago, a benign advertisement including gay people elicited an extreme reaction. After the campaign, IKEA faced numerous boycotts and bomb threats. Even though America was moving towards recognition and acceptance, the country had a long way to go. 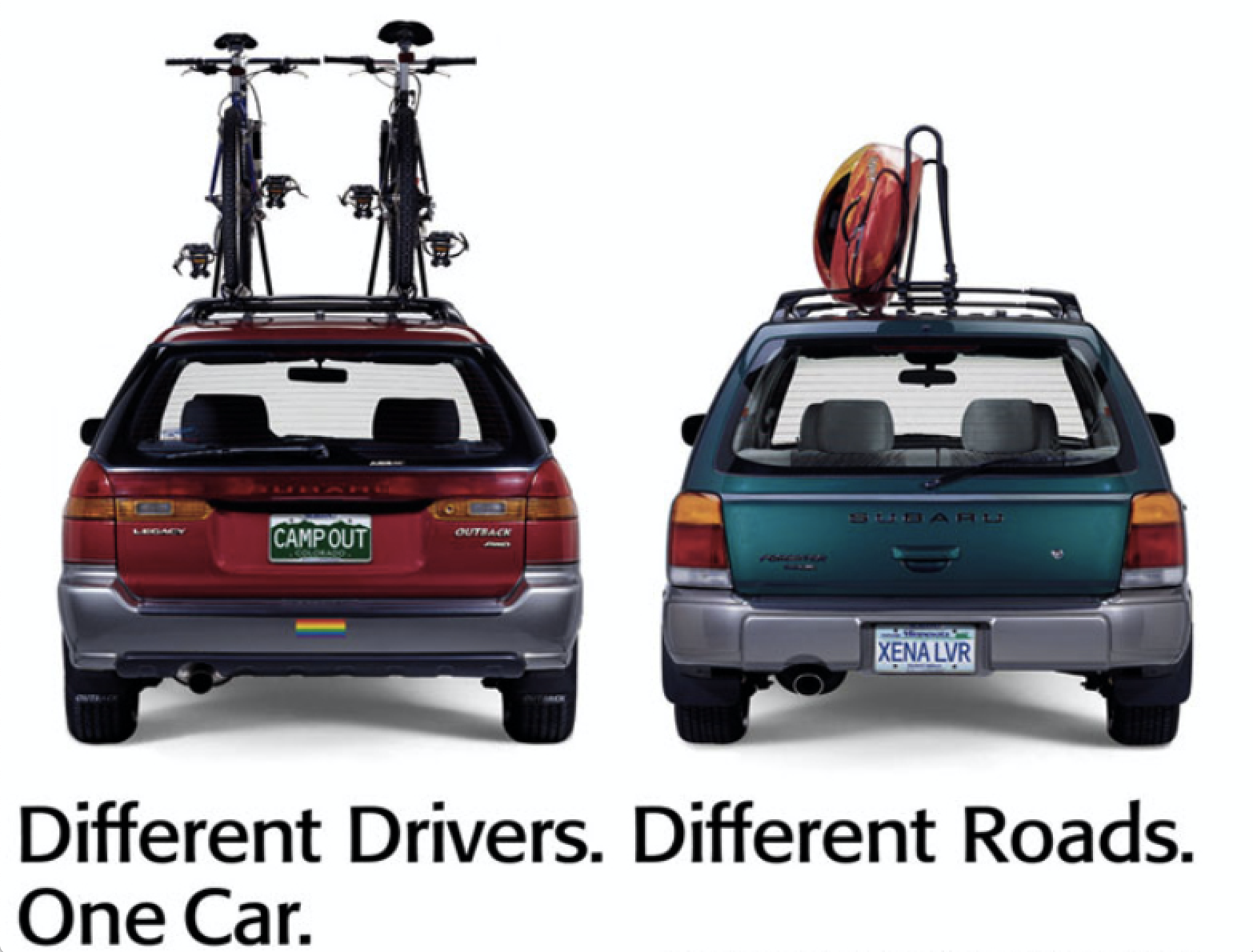 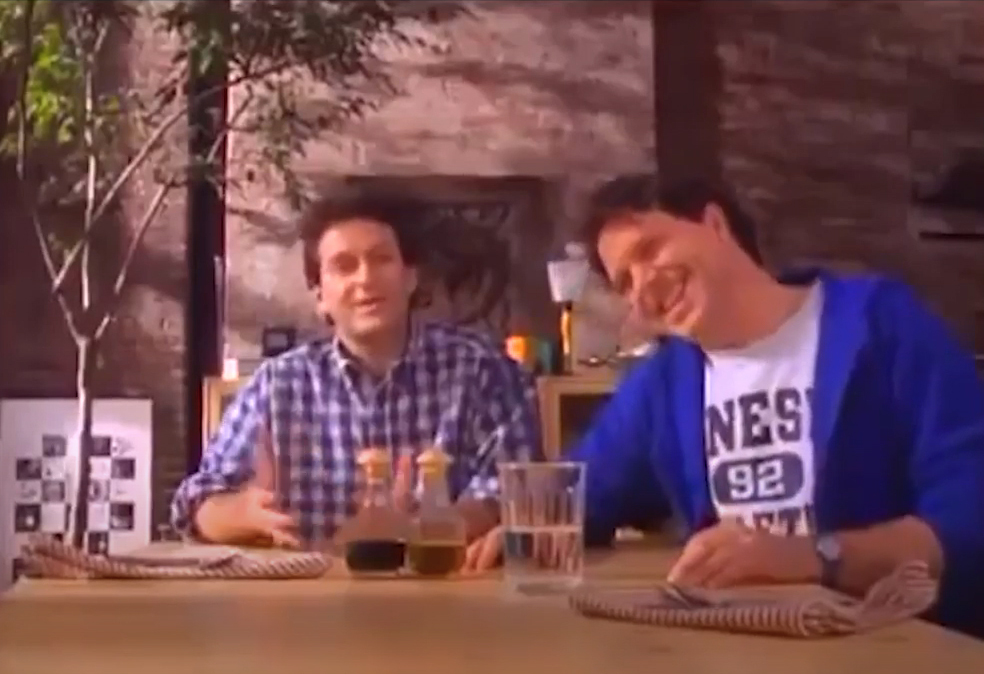 In the early 2000s, companies started directly and explicitly targeting the LGBTQ+ consumer. Gay characters on television and in film were portrayed as more than stereotypes. Their roles were more common and more complex, nuanced, and realistic in their depictions.

Despite the larger presence in entertainment, companies still risked severe backlash for LGBTQ+ inclusivity well into the 2000s. A lot of brands were still afraid to be labeled as selling a "gay product." Representation of transgender people was almost always negative, relying on transphobic tropes like mistaken identity. When brands did feature LGBTQ+ stories, they were almost exclusively focused on upper-class and white gay identities, rarely people of color.

It’s no surprise that financial institutions are among the most conservative when it comes to inclusive marketing. It wasn’t until around 2006 that banks started to openly market to LGBTQ+ customers. In an early example of inclusivity, Washington Mutual ran a print ad simply featuring a checkbook with the names of two men on the top.

While many brands had started to master marketing that was “gay-vague,” Levi’s took this idea one step further with a commercial that was produced with two distinct and different endings — each one targeted to either a gay or a straight audience. Instead of abandoning the trope of “guy gets girl” they simply offered an alternative, swapping in certain shots to reframe the story to appeal to a gay audience. When watching this commercial, men would have no idea that they were only seeing the version that was meant to appeal to their own sexual preference. 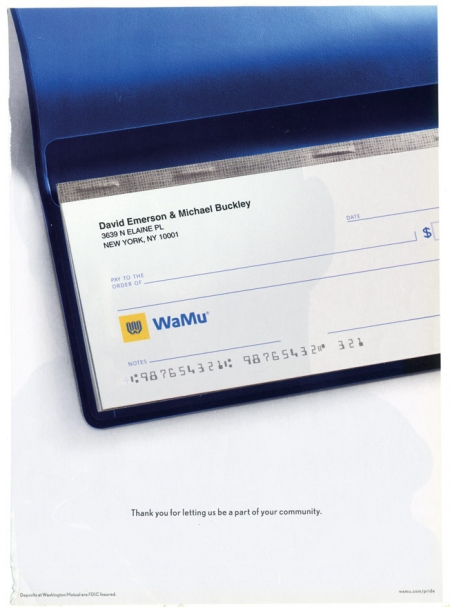 By the early 2010s, LGBTQ+ imagery was becoming normalized in American culture. Same-sex couples were showing up in more catalogs and commercials, as companies started to realize that the benefits of reaching out to their LGBTQ+ audiences outweighed the risks.

Brands of all kinds—from Cheerios to Tiffany & Co.— started to create inclusionary language and imagery in their marketing messages. Corporations had discovered that the LGBTQ+ market had grown to $743 billion, which meant that in many instances, it had become riskier to upset the LGBTQ+ community than the religious right, whose threats of boycotts had scared so many of these companies into silence only 10 years prior.

Brands scrambling to capture this market quickly led the way to a phenomenon known as rainbow washing, where brands try to temporarily co-opt the language and iconography of the LGBTQ+ movement as a marketing tactic. It’s a cynical ploy to tap into a new market, but at its worst, rainbow washing can act as a cover for other less-inclusionary practices. In 2018 AT&T announced with great fanfare during Pride Month that it had donated $1 million to The Trevor Project — but in that same year, the company had also donated an excess of $2.75 million to anti-LGBTQ+ politicians.

The passing of the Marriage Equality Act in 2015 was a watershed moment. Advertisers rapidly increased the number of ads featuring same-sex couples, and started to expand beyond "packagable" representations of Queer culture, to include broader portraits that included transgender and non-binary people, as well as LGBTQ+ people of color. Nike featured transgender athlete Chris Moser during the 2016 Olympics. Coke ran a Superbowl ad that included gender nonconforming pronouns, and in 2019 Gillette ran a spot highlighting a black transgender man learning to shave for the first time from his father.

While it is heartening to see how far things have come, the LGBTQ+ community continues to be shunned by some brands, as evidenced last year when the Hallmark Channel pulled a series of Zola ads that featured two brides kissing. 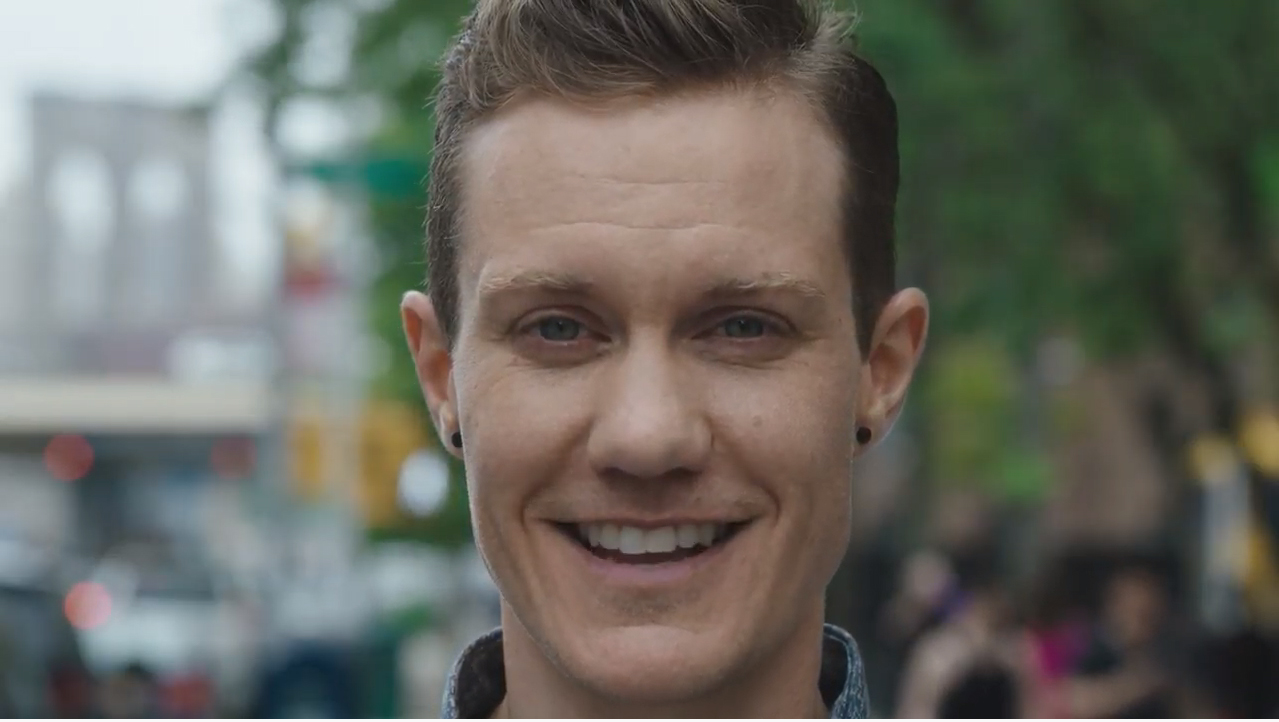 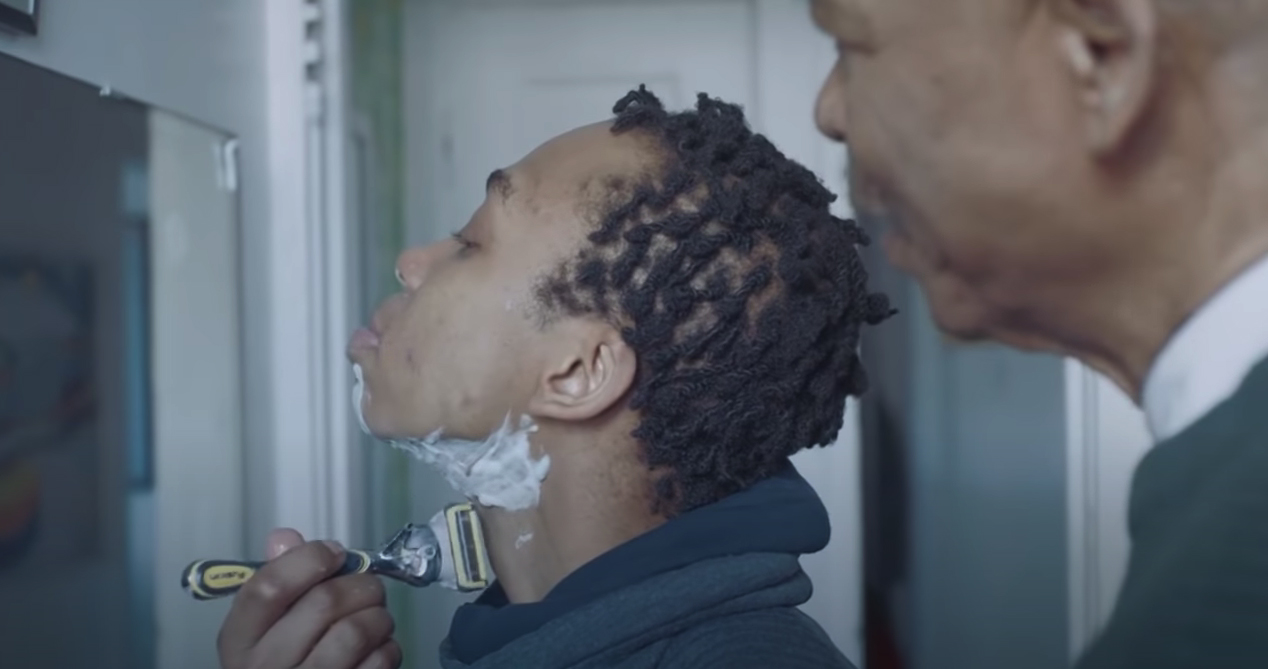 I think it’s fair to say that we’re living in a time of great change and that the shifts within America’s social fabric are far from over. While there may be plenty of unkind words for 2020, it is reassuring to see the growing representation of transgender and nonbinary individuals in advertising. Brands like Starbucks, Diesel and that harbinger of social change, Doritos, are featuring more inclusive representations of the entire LGBTQ+ community, and I believe this trend will only rise as America continues its rocky path towards social equality.

Here's how to join us on the journey:

Being a brand ally is not just a PR opportunity. It’s a chance to practice listening to a community, developing connections, and offering tangible assistance. It means investing in, and serving the LGBTQ+ community with the same vigilance that you would any other demographic. But most of all it means fighting for everyone’s right to exist. It’s time to ask yourself: what do you want to see reflected in the infinity mirror? Let’s create that vision of equality, together.

6 Learnings From Our Latest Listener Study on Supporting Social Movements

Becoming a True Brand Ally to the LGBTQIA+ Community