As Pass the Mic continues to feature fantastic womxn in the audio and media spaces, we would be remiss in not acknowledging the incredible work of organizations and nonprofits who have been dedicated to addressing the extreme gender gap for decades. A key pioneer in these efforts is San Francisco/Oakland-based nonprofit organization, Women’s Audio Mission (WAM). Founded by Terri Winston in 2003, for over 17 years, the organization has been committed to serving women, girls, and gender non-conforming individuals in the audio and music spaces.

WAM’s Director of Events and Communications, Cristina Ibarra, highlights that “all the sounds we hear everyday are created by less than 5% women and gender non-conforming (GNC) individuals. That’s a scary statistic when you think of all the media and music that we consume on a daily basis and women and gender non-conforming individuals don’t have a seat at the table to make sure that stories, perspectives, points of view are represented.”

WAM offers four keystone programs: Girls on the Mic, WAM Core Training for Women, Online Training for Everyone, and an internship program. Through these programs they have served over 3000+ girls in the Bay Area, offered hands on training to more than 350 women, and granted nearly 7,000 students in 131 countries access to their award-winning online curriculum. 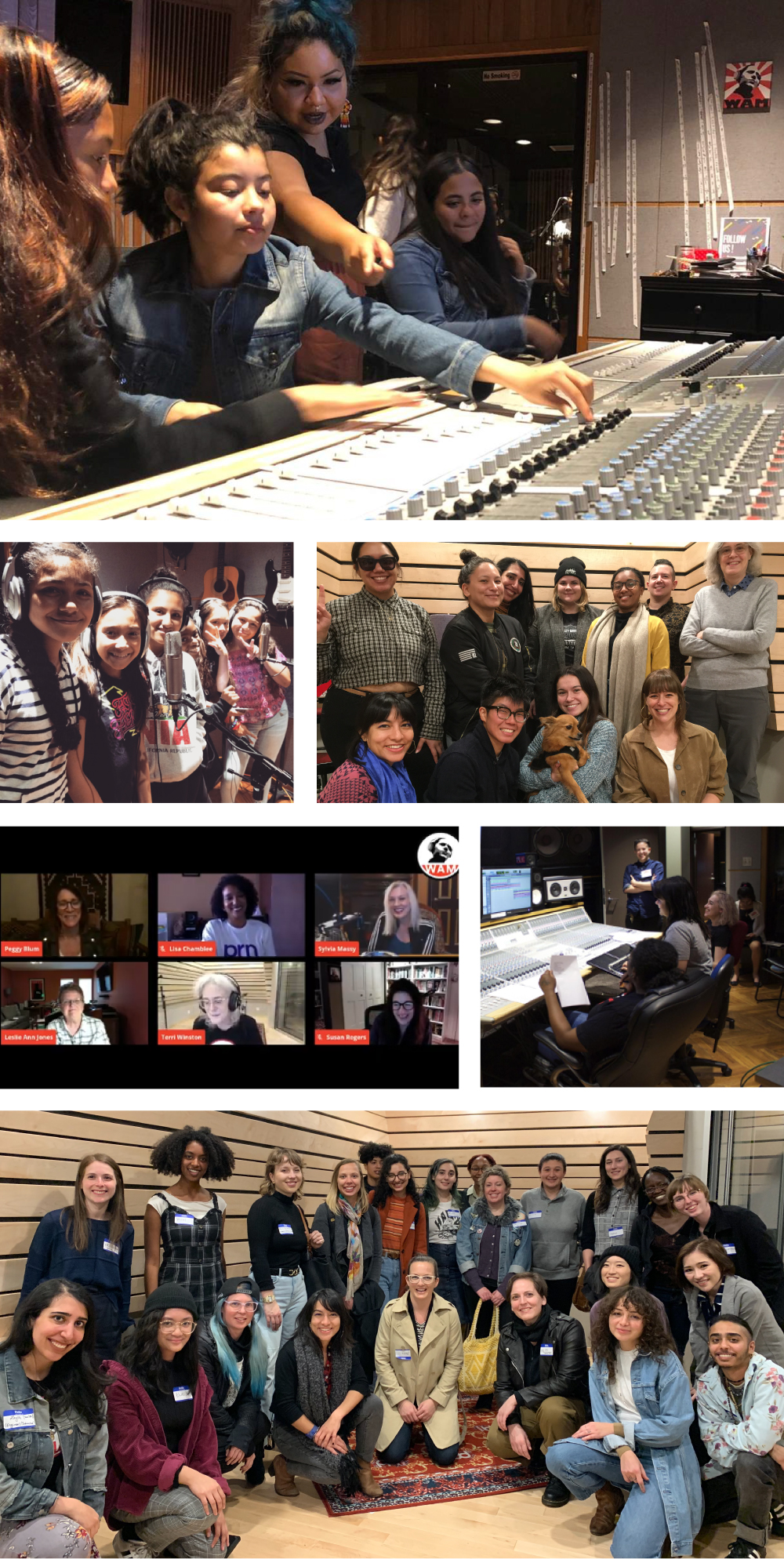 Girls on the Mic, an afterschool training and mentorship program, offers free creative technology and digital media production training. From beatumaking, podcasting, songwriting, and DJing, all enrolled girls, ages 11-18, are offered an opportunity to get hands-on experience. Girls on the Mic has worked in partnership with over 50 schools and organizations throughout the Bay Area.

Within their operations team, WAM selects 20-25 interns every year from an international applicant pool. These interns have the unique opportunity to “gain the confidence, knowledge, and skills that are needed to navigate the audio industry.” Intern Program Manager, Kristal Raheem explains, “The industry can be isolating for women and GNC individuals and for many, this is their first time finding a community within the field of audio. As an educator and mentor it is so wonderful to witness the growth and development of interns.” But their mentorship and commitment does not end with their program!

“It’s so rewarding to connect someone to a great opportunity, especially a career. We’ve been so lucky to place our graduates at companies like Dolby, Pixar, Sweetwater, Sony and Pandora! When women and GNC individuals come to WAM, they have the opportunity to discover something new about the industry and themselves.”

“From our Executive Director’s [Terri Winston] work on the Recording Academy's (Grammy's) National Task Force on Diversity and Inclusion and The Academy of Country Music's Diversity and Inclusion Task Force we are for the first time seeing 50% women/GNC folks on nominating committees for GRAMMY awards as well as being featured in both awards shows. WAM has continually advocated to get more women engineers/producers featured at our industries conferences, hosting numerous women-centric panels at SXSW, the Audio Engineering Society (AES) Convention and NAMM.”

As the organization looks toward the future, expansion and greater access to underserved communities is on the horizon. The 2020 COVID pandemic has fast-tracked Women’s Audio Mission reach through virtual programming which includes training sessions, classes, and conferences through WAM Everywhere. WAM everywhere launched in early March 2020, as a full suite of virtual programs and training including weekly trainings and office hour mentoring sessions for adults, daily classes for girls and non-binary youth 11-18, virtual concerts, and online networking events. WAM Everywhere has reached over 3,000 women, girls, and gender non-conforming individuals in over 25 countries around the world in only 3 months.

It is organizations like Women’s Audio Mission, whose important work continues to break down barriers for women in audio. Just as Pass the Mic strives to highlight the importance of gender equity in the audio space through awareness, WAM puts the mission into action throughout the Greater Bay Area. As their work continues to expand, donations and sponsorships will continue to make their programs accessible to more you women, girls, and gender non-conforming individuals. You can learn more about Exective Director and Founder, Terri Winston, in her Pass the Mic Mini-Mic interview.